Are you ready to get some quality HD reception without putting up a giant antenna outside? The Mohu Leaf 50 is an amplified indoor antenna and can produce clear high-definition reception, even better than cable or satellite!

If you are ideally located, you can receive ABC, Fox, PBS, CBS, CW, NBC, and much more! You can watch numerous over-the-air networks without a monthly fee.

With new technology, the Mohu Leaf 50 indoor antenna is designed to reach up to a whopping 60 mile radius. This technology will also filter out any interference from FM and cellular signals that are most likely in your area. 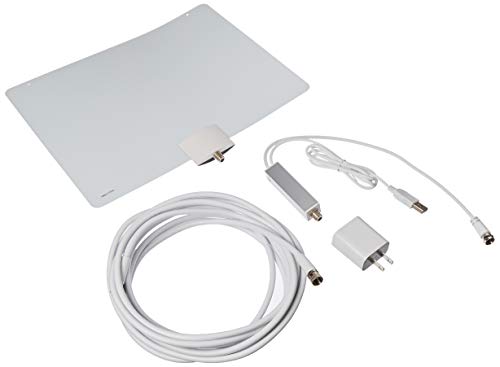 Mohu Leaf 50 is the original amplified version of the world’s first paper-thin HD TV antenna with omni-directional capabilities that reach out in a 50-mile radius from your home to bring you the most popular over-the-air TV shows, news, weather and sports on both network and local television- absolutely free after the purchase of the antenna. 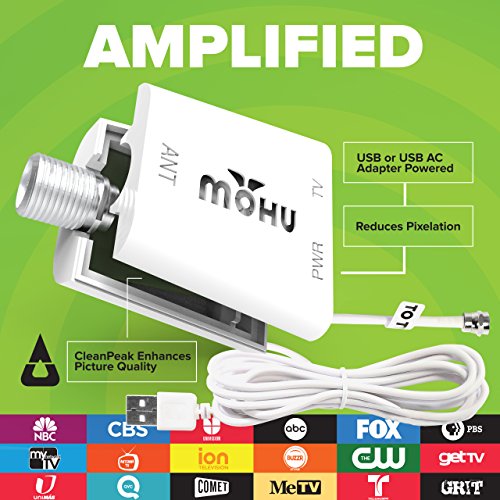 There is no need to pay costly cable and satellite fees to watch your favorite stations, such as PBS, ABC, CBS, NBC, and Fox. The Leaf 50 is derived from advanced U. S. Military technology and is combined with Mohu’s CleanPeak filter technology to eliminate unwanted cellular or FM signals.

The amplifier’s patent pending USB powering option boasts an impressive 15db of gain across the entire television broadcasting band, allowing the weakest signals to be received and viewed. The amplified antenna turns on and off with your television when using the TV’s USB port to power the amplifier.

The top 96 out of 100 most viewed shows on television are broadcast over-the-air in the United States according to Nielsen. Why pay for these channels when you can receive them for free? Plus, with free, over-the-air TV you will get better HD quality than you can get with either cable or satellite.

Digital television broadcasts are uncompressed, resulting in the best picture quality offered today. The Leaf has proven itself to be the category leader in performance and style by numerous independent tests and reviews.

Depending on what is being broadcast in your area, you’ll soon be able to watch popular national TV networks and local TV shows at no cost. The Leaf 50 can pull in all your local news, weather, sitcoms, kids and sports programming with no monthly contract or bills.
The Leaf 50 is multi-directional and does not have to be accurately pointed toward the television towers, meaning that you can receive broadcasts from multiple towers without readjusting the antenna.

CleanPeak Filter technology filters out cellular and FM signals, resulting in a clearer picture and allowing access to more channels.

distance from broadcast towers, and any geographical obstructions between you and the towers. Before you buy, visit http://dtv.gov/maps to see what channels are available in your area.

Comes with 1 Year warranty. Email the company at support@gomohu.com for help setting up your product. You can also visit gomohu.com.
Concerns / Drawbacks
Some customers feel that the price on all inside antennas are too high and that is their opinion. It’s a personal choice.

If you are in doubt about reception, before you purchase this antenna, you can visit the company’s website and they can help you decide what reception is available in your area.

What antenna Would be an Alternative to the Mohu Leaf 50?

An alternative to the Mohu Leaf 50 would be the Mexonga HDTV Antenna. It also allows you to cut the cable cord and receive HD channels free. It also cuts out interference from FM signals but I’m not sure how it handles cellular interference.  It claims a receptive range of 60-100 miles if you are in an ideal location. This is a stand alone unit, no need to hang it anywhere. The company offers great customer service support.

You are provided with a detailed video to help you in that area. If you have set-up problems, refer to the owner manual and user guide provided.
Not a problem, you can paint the “white square” to match any décor and it won’t stick out like a sore thumb.
Keep in mind that your physical location will dictate what is available to you which has nothing to do with the capabilities of the product.
The Mohu Leaf 50 has an amplifier connected to the antenna. This filters out FM signals, so they don’t interfere with your picture reception.

Final Thoughts on the Muho Leaf 50

As with any type or style of antenna, your location is a highly determining factor on how well it will work. The Muho Leaf 50 has a reception distance of up to 60 miles. The reception you receive will depend on your location and what is available in your area.

If your main interest is cutting your cable bill, you have most likely already decided that you can do without a lot of shows you never watch anyway! For that reason you will be satisfied with this type of antenna and the different HD shows you can get—FREE!

CHECK ON PRICE
Copyright ©2022 DvrWithoutSubscriptionhub.com
HomeAboutContactPrivacy Policy
www.dvrwithoutsubscriptionhub.com is a participant in the Amazon Services LLC Associates Program an affiliate advertising program designed to provide a means for sites to earn advertising fees by advertising and linking to amazon.com. Amazon and the Amazon logo are trademarks of Amazon.com, Inc. or its affiliates